Not necessarily a total failure; but a nice lesson learned.  After some 63 days, my fall cucumber plant test is not producing anything.  Which is fine; because like I said; it was a test.  I think if it had pollinated, it may have produced fruit.  But... it didn't, so I must admit the time has come to let it go.

I hope I didn't waste the potting soil.  I'll revamp it for the spring planting season.

Have a wonderful evening,
Blondie
Posted by Blondie at 5:30 AM No comments:

Moving the plants inside 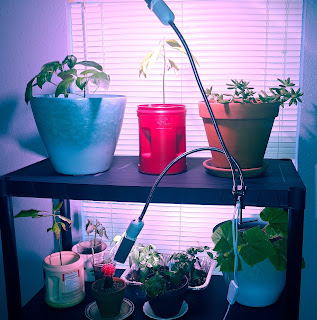 Well this doesn't look like much; but I thought I'd bring my plants in.  Getting a chilly in zone 8b.
Unfortunately, the grow light doesn't fit well on this shelf.  I may have to make some changes.  Some of the "planters" are new, and some are reused.  For example, I save my coffee and coffeemate cans for various other activities.

Have a marvelous evening and remaining week!

Peace to all,
Blondie

Around the end of August I decided I wanted to revisit my gardening hobby that was abandoned several years ago.  Knowing I was way off season, I decided to do a few experiments and/or tests.
I planted a few things from end pieces (i.e. sweet potatoes); which produced nothing.  I also tried a new to me method I saw on youtube.  This method was also a failure.  With failure comes lessons learned, so it is ok.  That method involved planting spinach directly in a bag of potting soil and using  a tote to make a greenhouse effect.  Well, it was too hot in zone 8B for the spinach to sprout, so I threw the bag and all in the compost bin.

Moving into the early part of September (actually Labor Day), I planted a couple of test plants.  Two cucumber plants potted together, and 3 bell pepper plants potted together.  The germination was slow, and the plants have continued to develop even if it is slow and off season.  So, I am hoping to have at least a couple cucumbers or bell peppers by the middle of November.  Zone 8B projected first frost is around November 16.  Below are progress photos for the cucumber.  Whether it produces fruit or not, it is still a good learning experience.


Maybe there will be a few cucumbers before the first frost.

Since the plant is attaching itself to the "trellis" it is doubtful I will be able to move it if/when the weather gets too cold for it...  I am still a little excited that it is growing (one way of the other).

Peace and love to all,
Blondie

Posted by Blondie at 8:00 PM No comments:

This is still my favorite repainted piece and currently resides in my living room.

A lovely vintage inspired pitcher and bowl sits on the top; with truly vintage book ends from my childhood on the lower shelf.  This is a piece I take a great deal of pride in.

Blondie's Bargain Adventures: Painted Vintage Telephone Table: Hello everyone!  I want to thank you for stopping by and taking the time to read my blog.  I know I'm not the best photographer in the ...
Posted by Blondie at 1:47 PM No comments:

Well hello there... yes it has been a very, very, very long time.  The past several years have been a roller-coaster ride of life changes.  I am now re-inventing a simpler and calmer life.

Now its time for me... I still love a good bargain.  I am beginning to try gardening again.  Life as I knew it for the past several years is back on a level and fair playing field.  At least I hope so.

I hope to find a few bargains to share, a few gardening experiments to write about and so on.

Stay tuned for more from Blondie's Bargain Adventures.... it's good to be back!

Peace and love to all,
Blondie 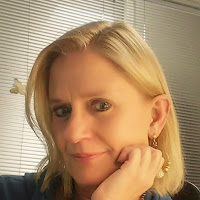 I thought I would just share a few of my dollar store favorites.  Dollar stores have a lot of items that are unworthy of my hard earned money; yet there are some items that I purchase occasionally; and some I purchase quite regularly.

Example:  An occasional purchase is makeup.... I have certain favorites; like my foundation, eyeliner, and mascara that I wouldn't trade for dollar store items to save my life.  Well ok, I might try something; but historically I always switch back to my favorites.

Eye-shadow and blush are a different story.  These L.A. COLORS brand eye shadow trio and the blush are used regularly. 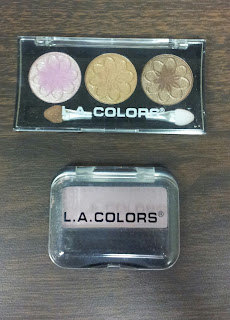 Another favorite item from the dollar store are reading glasses.  As I've gotten older, I need reading glasses well .... for reading.  I keep several pair around the house and office.  Since these are only $1.00 replacing them is not a problem. 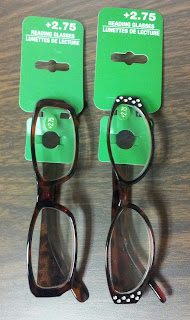 Thanks for reading, and have a blessed day.

Posted by Blondie at 5:30 PM No comments:

I confess!  As an anniversary gift of choice for working with my company for 15 years; I picked and received a Kindle. There wasn’t really anything else that interested me. When the Kindle came out (as well as other ebook readers), I was not very excited about them.  I guess you could say I am old school.  I preferred the idea of seeing, touching, holding, and saving a physical book.  I still do in many instances.  But, after a friend told me that you can get ebooks for FREE, I thought what the heck? I’m going to check this out.


The first couple of experiences weren’t very good.  It seemed the few FREE ebooks I selected were the first in a series of books.  Not wanting to get into that trap, I was pretty disappointed.  After all, you can buy physical books at garage sales, rummage sales, etc… for practically nothing.  Not to mention annual Friends of the Library sales as well as checking out books from the library.


My friend, an experienced ebook reader, shared a website with me that emails daily recommendations to me based on my pre-selected interests.  That website is https://www.bookbub.com/home .  It automatically links me up with ebooks from various sources.  Some free, some not free.  Lots of bestsellers!  It has allowed me to download several that I can save and read later.  As any experienced ebook reader will attest… carrying one e-reader when traveling is so much more convenient than packing multiple books especially if you are going to be sitting idle for long periods of time.  And this my fine friends is what I’m excited about.  I’ll be going on an annual trip next week and only need to carry one book… my Kindle.  Of course, I will have to keep it charged as I’m sure anyone will tell you… so I confess – I now LOVE my e-reader aka Kindle.
For me it was FREE (best bargain ever), and most of the ebooks I've downloaded were FREE as well.  I only purchased one ebook and it was much less expensive than a hard copy.
Next I'll have to check out how the public library ebook system works.
Thanks all, and have a beautiful blessed day!
Blondie
Disclosure:  The above post is my own opinion.  I have not been compensated monetarily or with gifts of any kind by any company associated with the products mentioned in this post.

Posted by Blondie at 5:30 PM No comments: